You won't Forget this Place ...

To the old Master, eternally I am bound,

Have always been, will still be, on this merry-go-round.

When you pass by my tomb, ask for grace,

It’s a shrine where the drunkards abound. 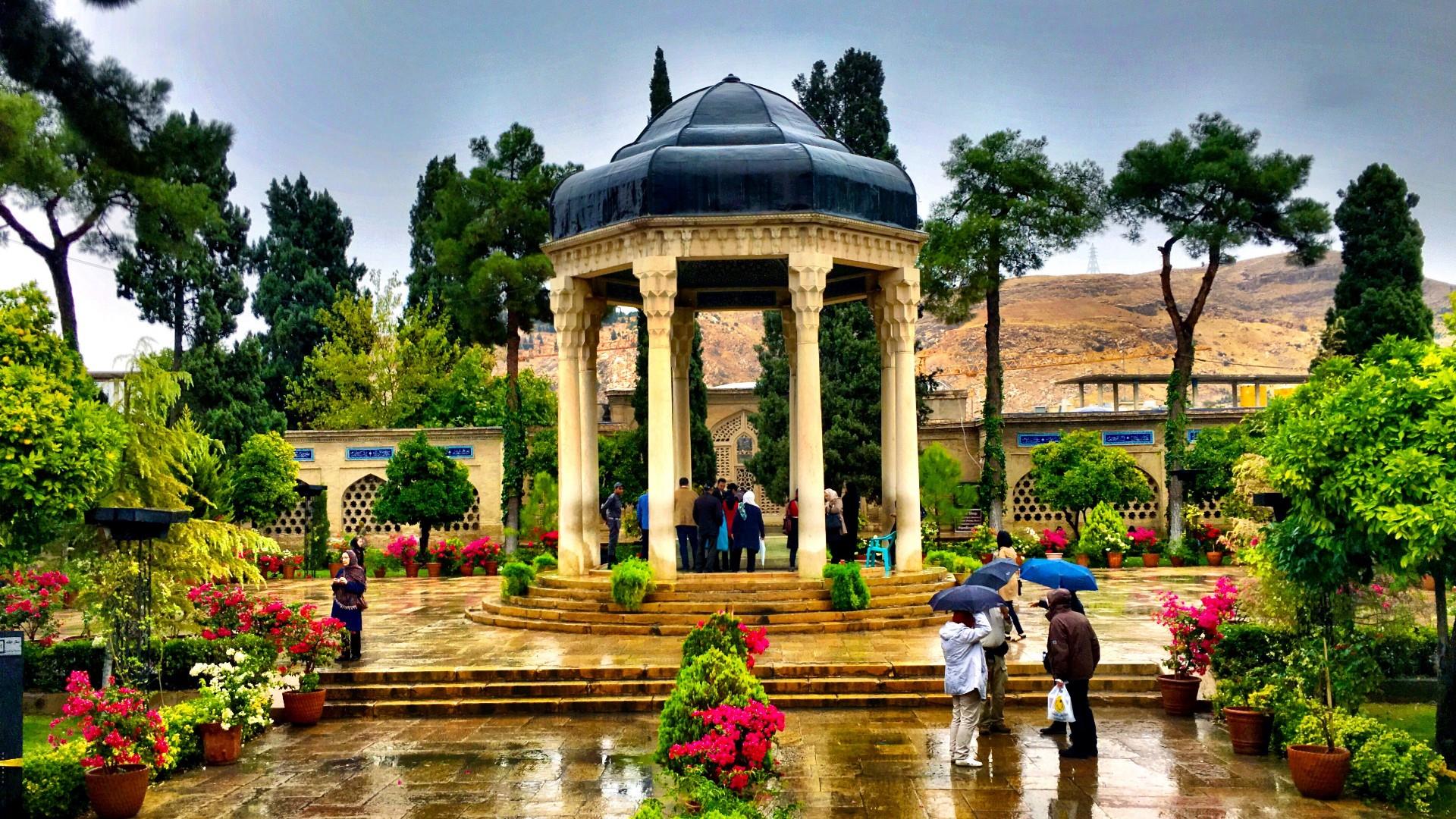 There is no way for a Persian to hear Shiraz’s name and doesn’t immediately think about Hafiz. To Persians, he is nothing less than a prophet. The prophet of love, art, and beauty inside. Hafiz is an inseparable item of any Persian celebration and ceremony such as Nowrouz and Yalda Night. He is one of the poetry geniuses from all times, whom Goethe, the great German poet, wished to be one of his disciples. The chances of not finding a Hafiz book in any Persian house are zero. Hafiz Shirazi is beloved among Iranians, and anyone, from children to the elderly enjoys reading his smart, beautiful, and involved poems. Every year, on 22nd October, people show their respect to him on national Hafez day by his tomb, Hafezieh. 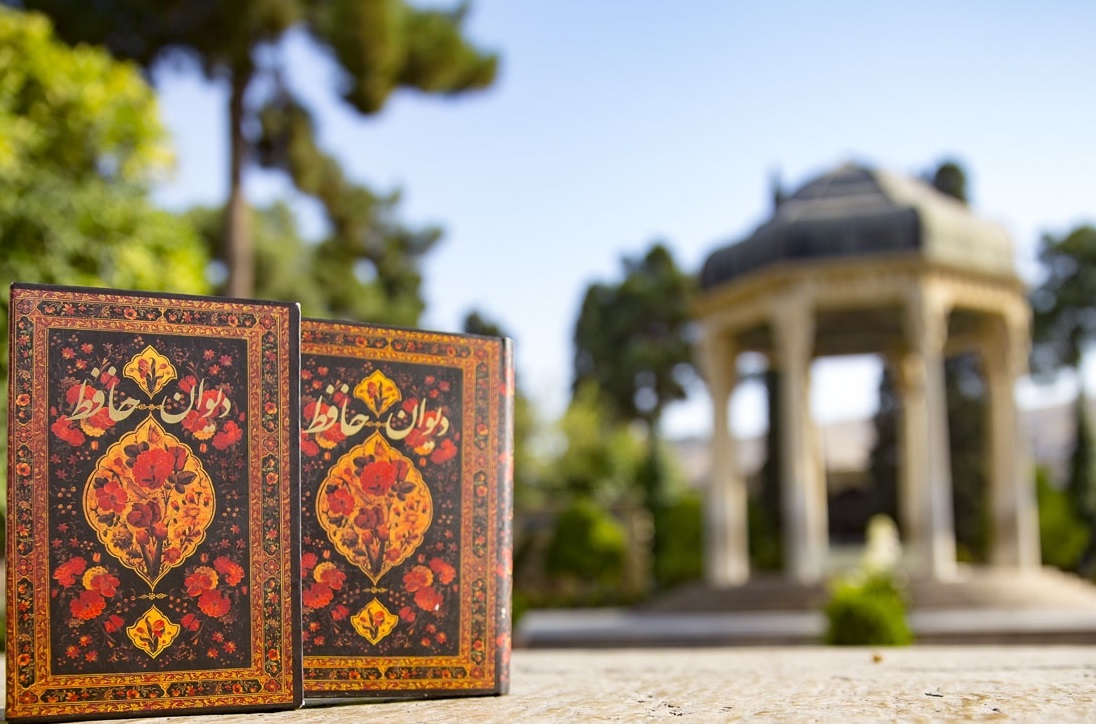 In 1452, 65 years after Hafez’s death, a small, dome-like structure with a large pool in front of it was built near his grave at Golgasht-e Mosalla by the order of Babur Ibn-Baysunkur, a Timurid governor of Shiraz. At that time, this place was one of Shiraz cemeteries and Goldasht-e Mosalla Garden is mentioned several times in Hafiz poems. The original land that the tomb of Hafez is in it was more than two hectares wide.

After that, in the Safavid and Afsharian eras, this tomb was renovated two times; once on the order of King Shah Abbas, and years later, on the order of Nadershah Afshar. Karim Khan Zand, the righteous governor of Shiraz, built a new metal shrine with this hafiz Ghazal (or sonnet) engraved on it in calligraphy:

In the hope of union, my very life, I’ll give up

As a bird of Paradise, this worldly trap I will hop.

After several renovations, destructions, and constructions during history, finally, the current pavilion structure was built in 1935. It is designed by the well-known French architect and archaeologist, André Godard, using Zandieh architecture elements. 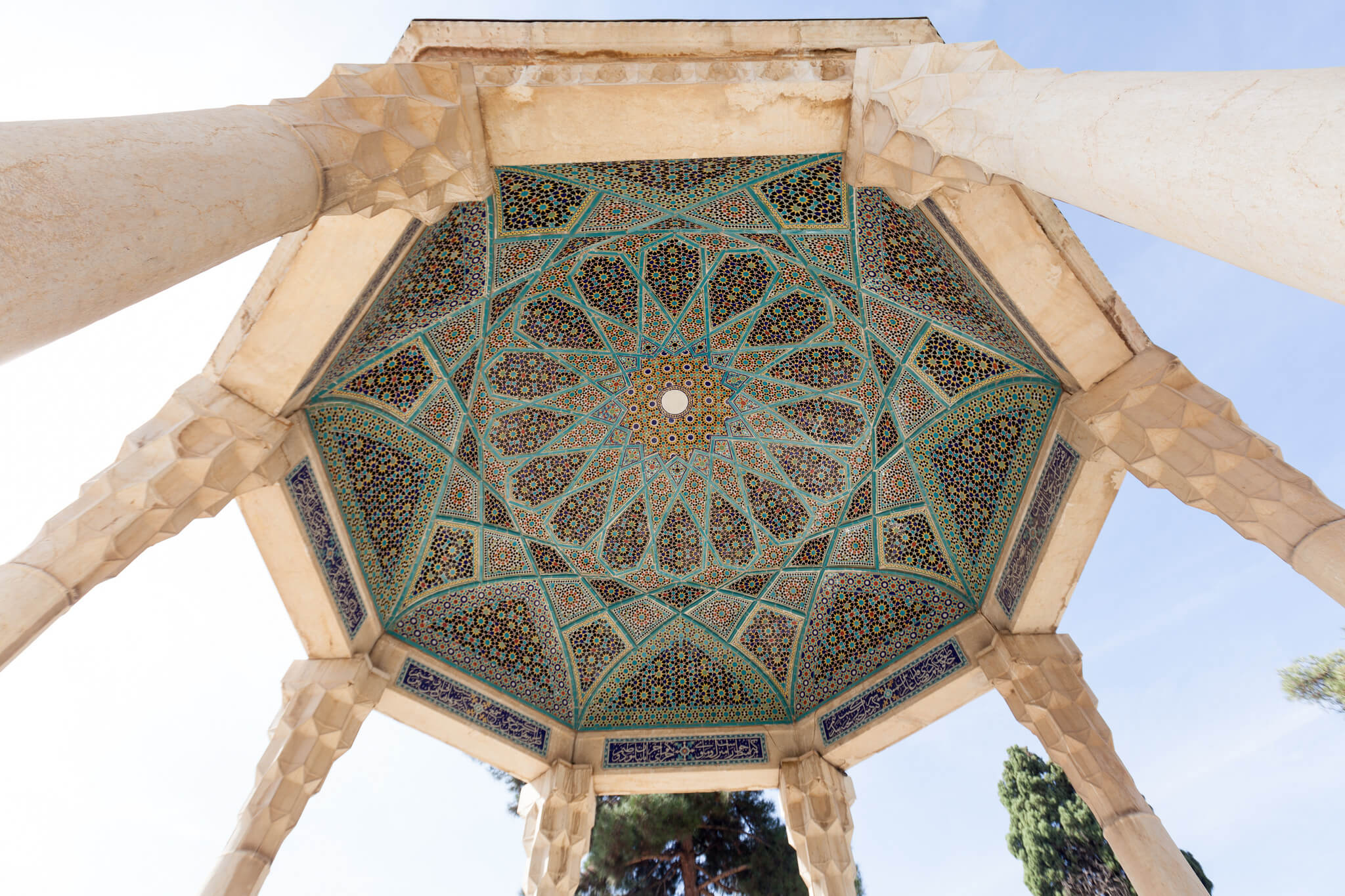 The Tomb of Hafez of as Iranians call it Hafezieh, is located on the south of Quran Gate, and it is a complex of monuments. This area is one of the most crowded parts of Shiraz. The tomb is hidden from the main street: a symbol of prison for Hafiz’s mystical thoughts in the modern world. Another symbols that you can find in this complex are: the southern part of Hafezieh is the symbol of the material world, you have to pass this part and approach toward skies (nine stairs to the tomb as it indicates the number of skies in Persian literature), and finally see the sun (the tomb itself). The northern part of the complex is regarded as the world of the hereafter, and there is eight entrance to the grave (eight is the number of paradise’s door in Islam). The outer part of the dome is a symbol of the sky and a Darwish’s Turkish hat. But the inner portion is designed with beautiful tiles in turquoise blue (symbol of paradise), purple-red (symbol of eternal wine), black and white (symbol of night and day), and dark brown (symbol of soil).

There is a large pool beside the tomb where you can make a wish and throw a coin in it, be careful what you wish for because the chances of coming true are high! 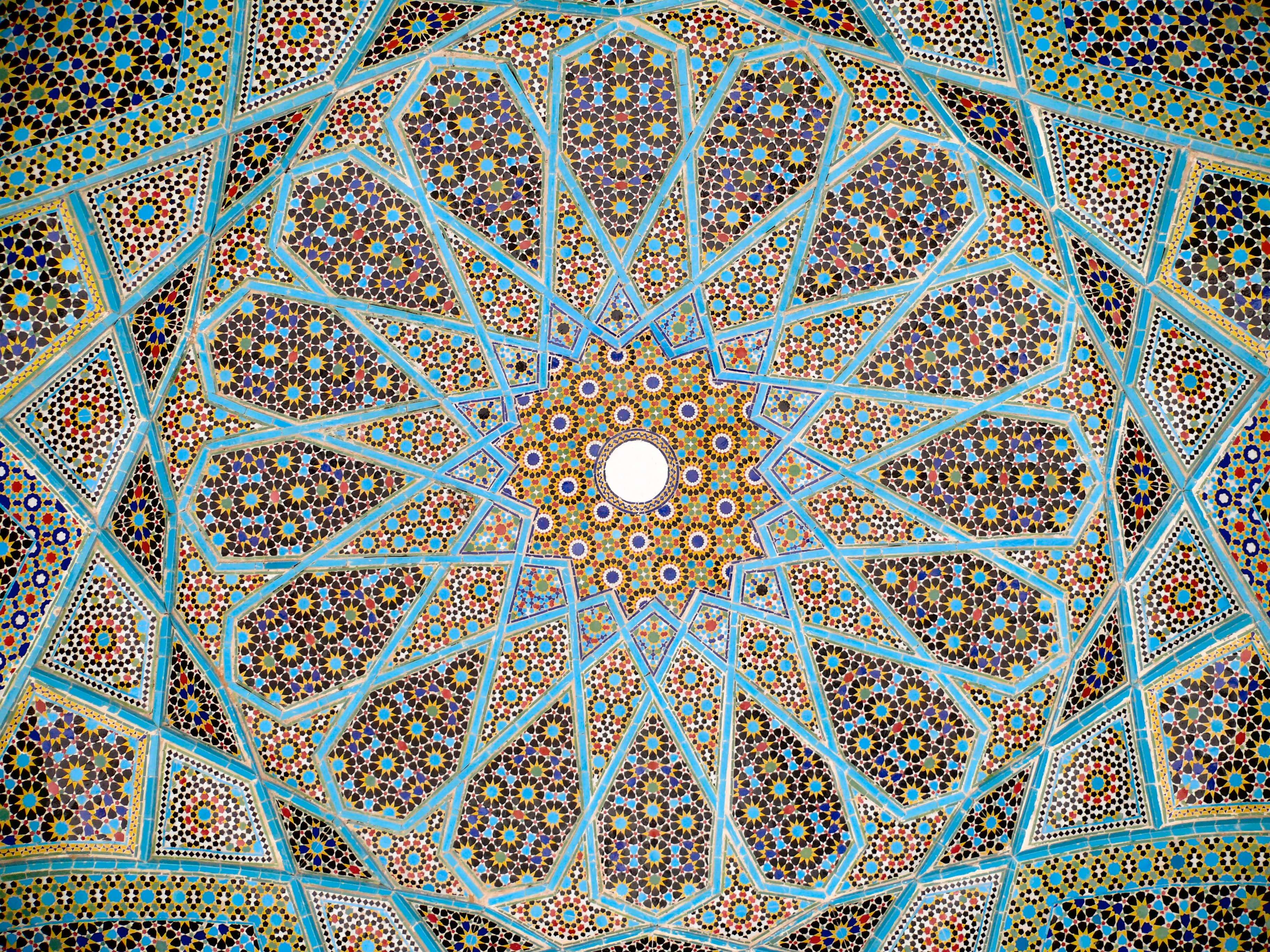 Hafezieh is right in the heart of the city, so you have many other attractions to visit nearby. Besides the lovely payments all around the complex, you can reach Jahan Nama Garden on foot. Other tourist attractions that are nearby are Karim Khan Citadel, Vakil Mosque, Vakil Bazaar, Quran Gate, and Nasir Ol-Molk Mosque (the Pink Mosque). 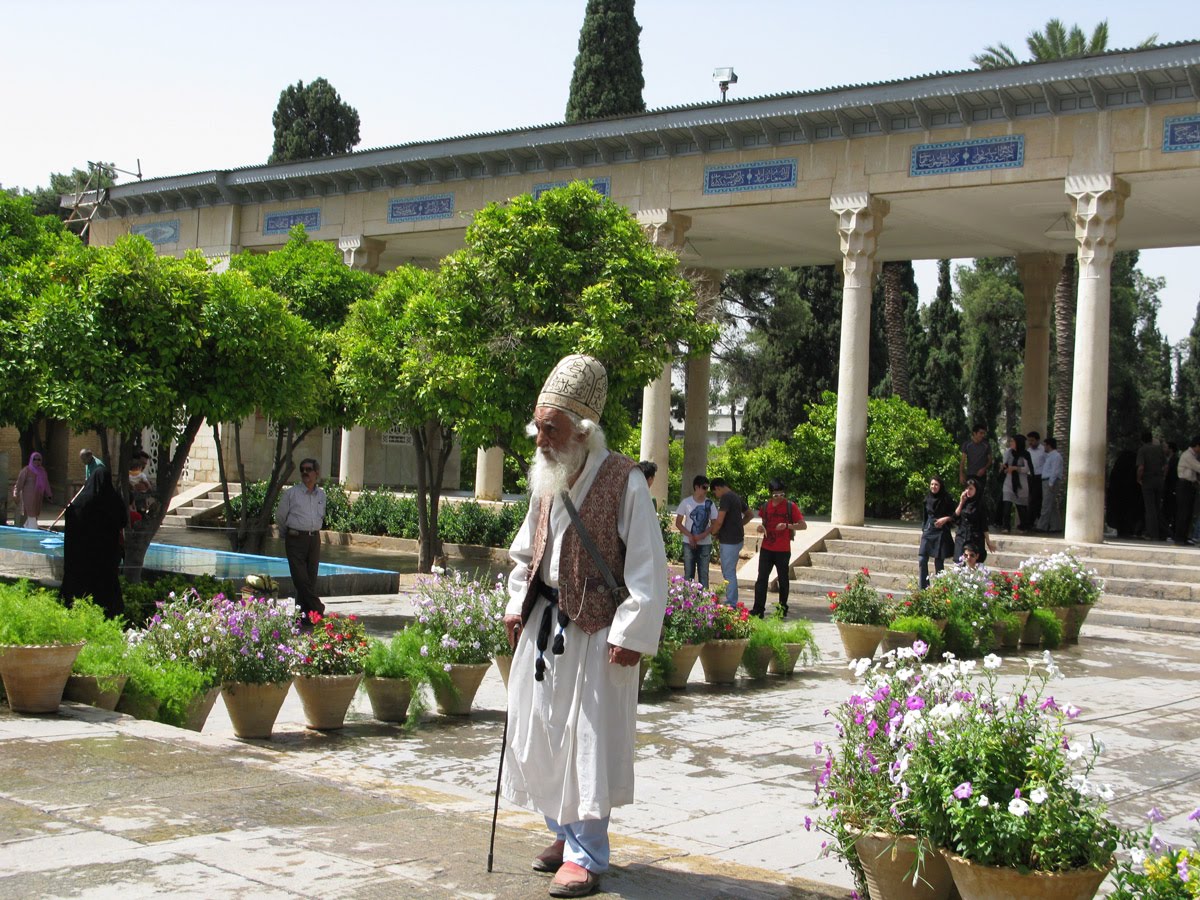 Where to Eat near Hafezieh

Visiting Hafezieh can take a lot of your energy and make you hungry. But don’t worry! There are lots of restaurants nearby where you can enjoy a delicious Persian dish. Haft Khan Restaurant, Shandiz Restaurant, Qavam Restaurant, Shah Abbasi Restaurant, and Sharzeh Restaurant are some of these places to mention.

Where to Stay near Hafezieh 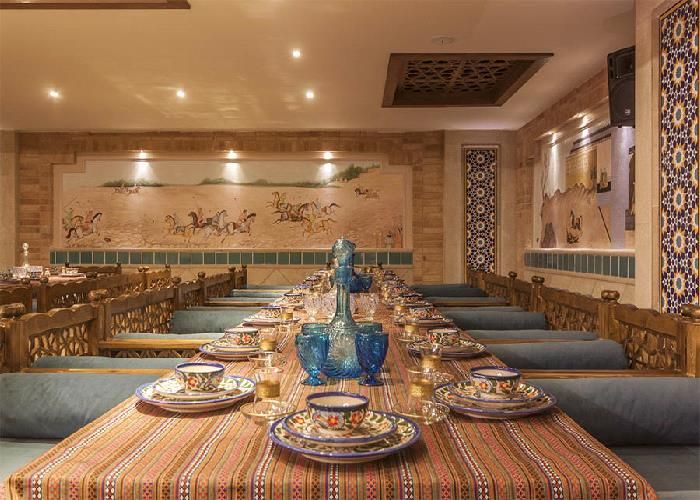 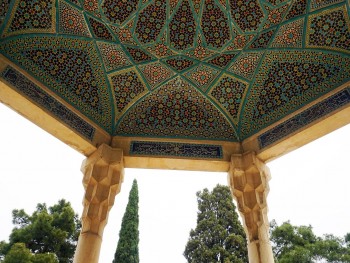 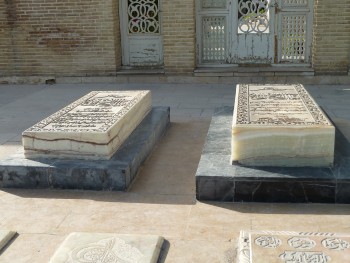 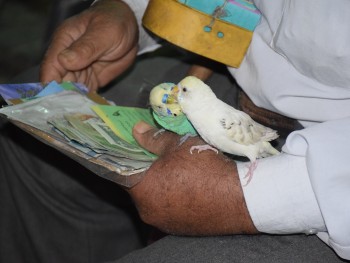 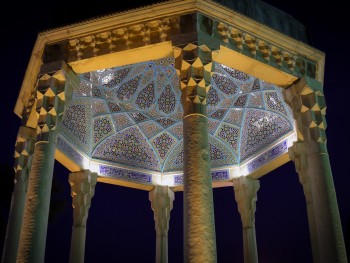 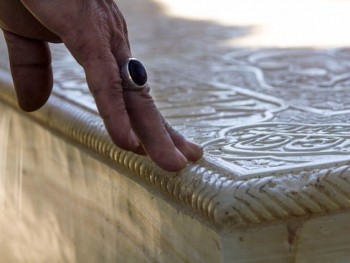 How To Get To Tomb of Hafez

Go to Zandieh Station, find buses to Narenjestan, and get off at Hafezieh Station.

Use these bus lines to get there: Dastgheib to Narenjestan and Golestan Sq. to Namazi. If you are in Hafez intersection, use these lines: Kolbe Sq. to Eram Sq. and Valiasr to Ziba Shahr.

Hotels near Tomb of Hafez, Shiraz