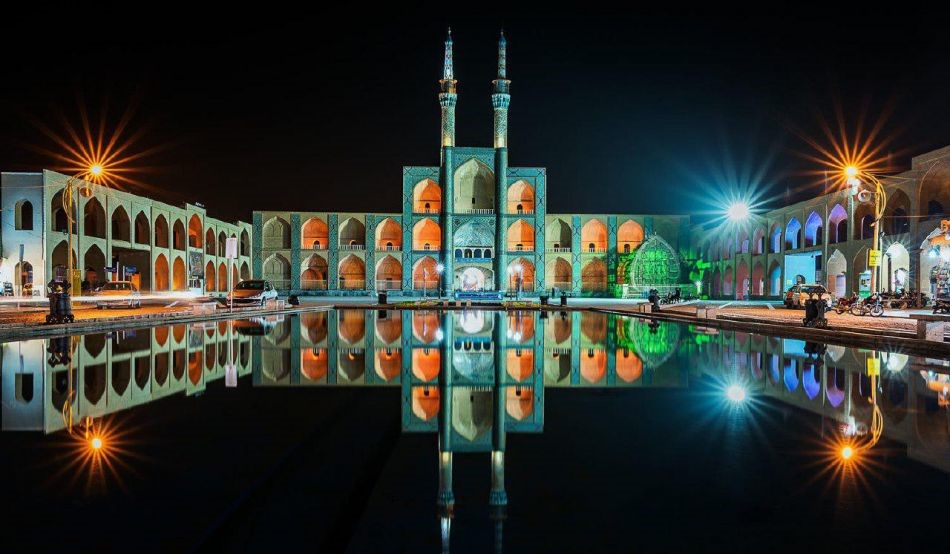 Amir Chakhmaq is the name of an ancient square in Yazd that includes several old structures such as a bazaar, mosque, water storage, and a mausoleum that are all listed as National Heritage Sites. Amir Chakhmaq Square is the symbol of Yazd province and is also known to be the center of social gatherings and manifestations. 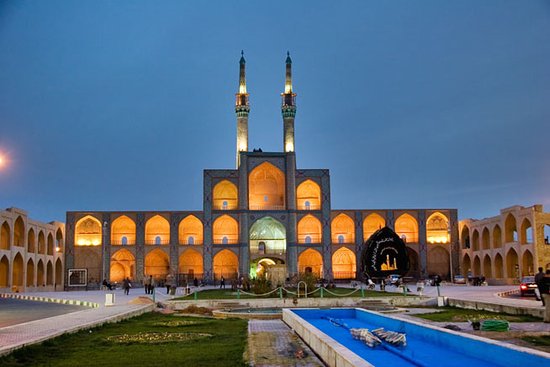 Different parts were added to the complex after him during various eras, however, they all were too trivial in comparison with the original version. Moreover, renovations and reconstructions were made within different periods as well.

Before Pahlavi Dynasty could take the thrown, Amir Chakhmaq Square, like some other squares, were transformed into cemetery and people used to bury their dead loved ones there. Later on, after Pahlavi Dynasty came into the thrown, burying dead bodies in this square was banned and all the graves were destructed. Fortunately, Amir Chakhmaq Square then got its glory back.

Today, Amir Chakhmaq Square is still shining in Yazd and attracts many tourists each year. 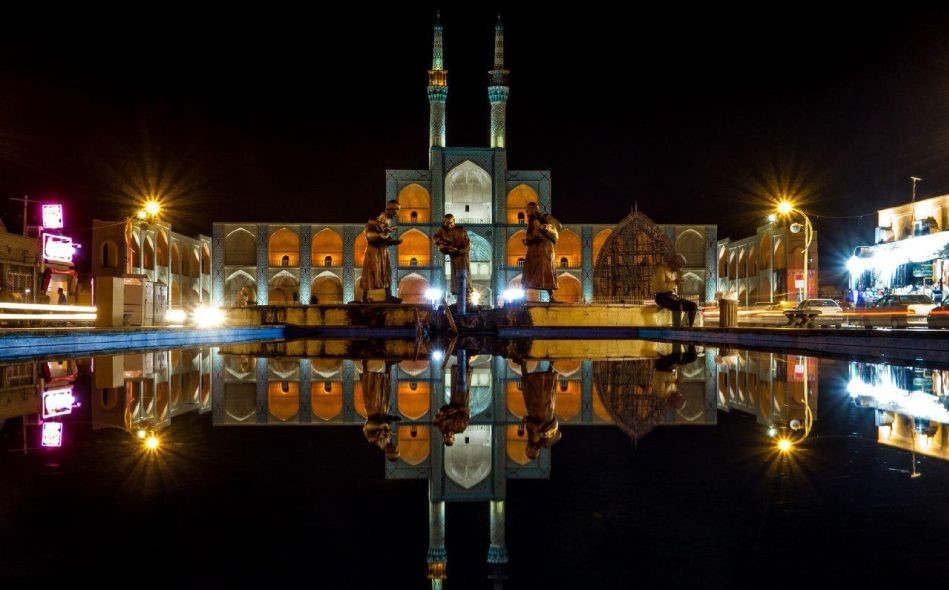 Amir Chakhmaq Complex contains various ancient buildings inside that we would take a brief look at each of them to see why they leave their visitors in wonder and admiration. 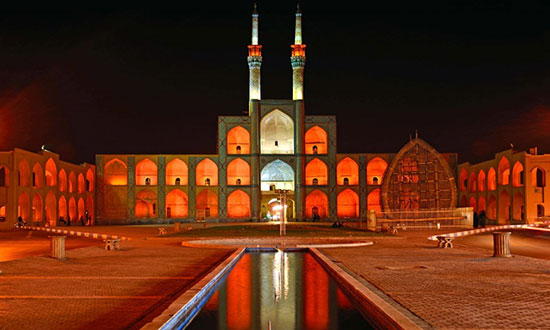 Also known as New Jame Mosque or Dohouk Mosque, Amir Chakhmaq Mosque is the oldest structure in the square. It is considered to be the second biggest, most beautiful, and most significant mosque after Jame Mosque of Yazd. During Qajar era, the urban context was developed and expanded and so the mosque was no longer in the suburban area. Its exact location is the southern part of the square.

The interior design looks just as eye-catching as the exterior. Many Persian and Islamic details all over the place have made it a majestic representation of Iranian art. The details include various text carvings, brick art, mosaic inscriptions, fretwork, tiling, arabesque pattern combinations, muqarnas structures, marble designs, and Quran carvings on inscriptions. 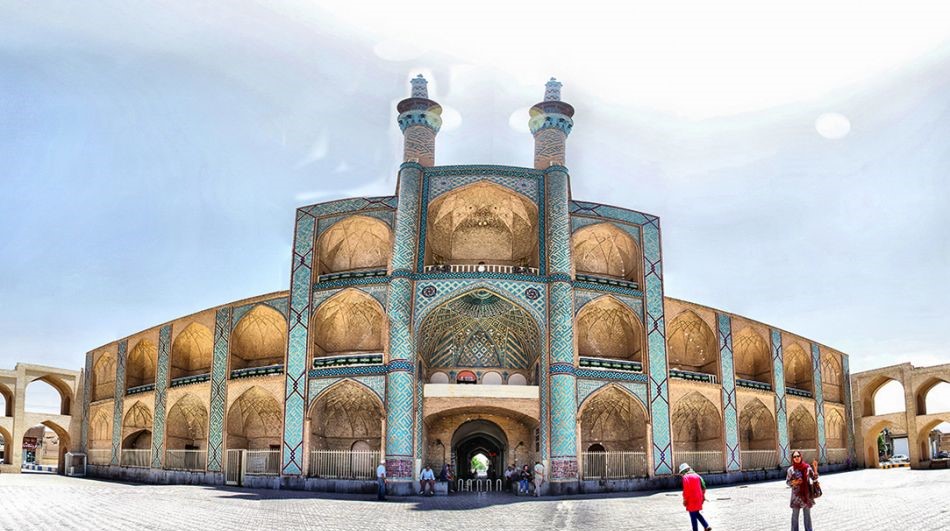 Similar to any other cities in Iran, Yazd possesses a grand bazaar too that builds the economic basis of the city. With the constructions of Shah Street (known as Ghiam Street today) in Pahlavi era, the bazaar was divided into two parts and some of its significant areas were helplessly destroyed.

For the time being, sales in the northern part of this bazaar are highly efficient. It is the greatest center of fabric, sweets and candies, gold, and carpet stores. The oldest part of this bazaar is located in the eastern part of the bazaar and is called Haji Ghanbar Bazaar. The name refers to its builder, Nezamoddin Haji Ghanbar Jahanshahi, who was one of the rulers of Yazd. Haji Ghanbar Bazaar includes some priceless reminiscences of the 9th century in the Islamic calendar. There are also some stores that manufacture natural materials like sesame sweets, colors, fabrics, and so forth. It is also a rich place for offering Yazd crafts. Tekyeh is a space full of rooms that are used for religious rituals or watching important events. It is highly probable that some of these rooms were designated for the ruler of the city or the governmental seniors, and some others were specialized for women. The minarets of this structure were used for saying Azan, the Islamic call for saying prayers. 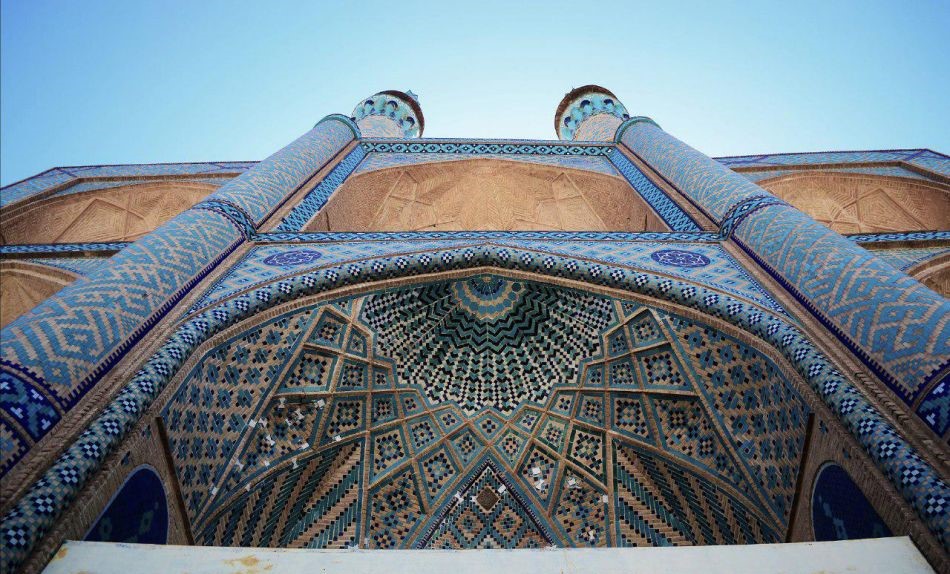 One of the featuring factors that add up to the beauties of Amir Chakhmaq Square is the Historical Nakhl on its eastern part. According to evidence, Amir Chakhmaq Historical Nakhl is almost 450 years old. Nakhl is actually a giant wooden coffin that is carried in Muharram rituals in an event called Nakhl Gardani (=carrying Nakhl). It looks like a cypress tree that is a symbol of liberty itself and is decorated with carvings. 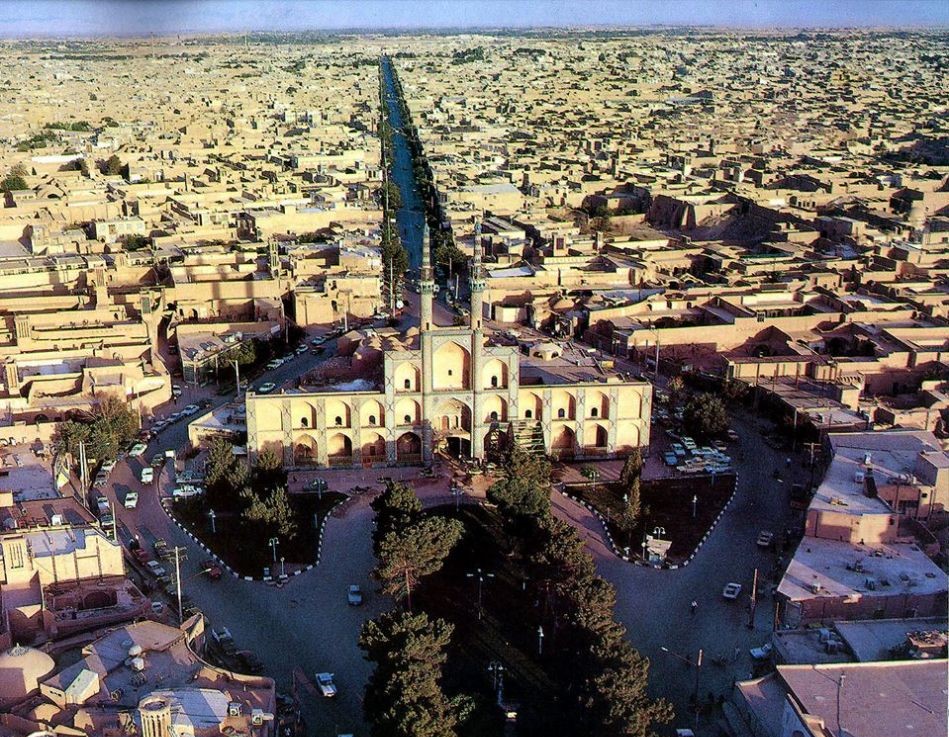 As mentioned earlier Seti Fatemeh Khatoon was a wife to Amir Chakhmaq, the establisher of the square and the mosque in Amir Chakhmaq Complex. She died in the 9th century in the Islamic calendar and her mausoleum is located in the northern part of the square. Its dome has green tiling and the interior is designed with mosaic and muqarnas on a ground of stucco. 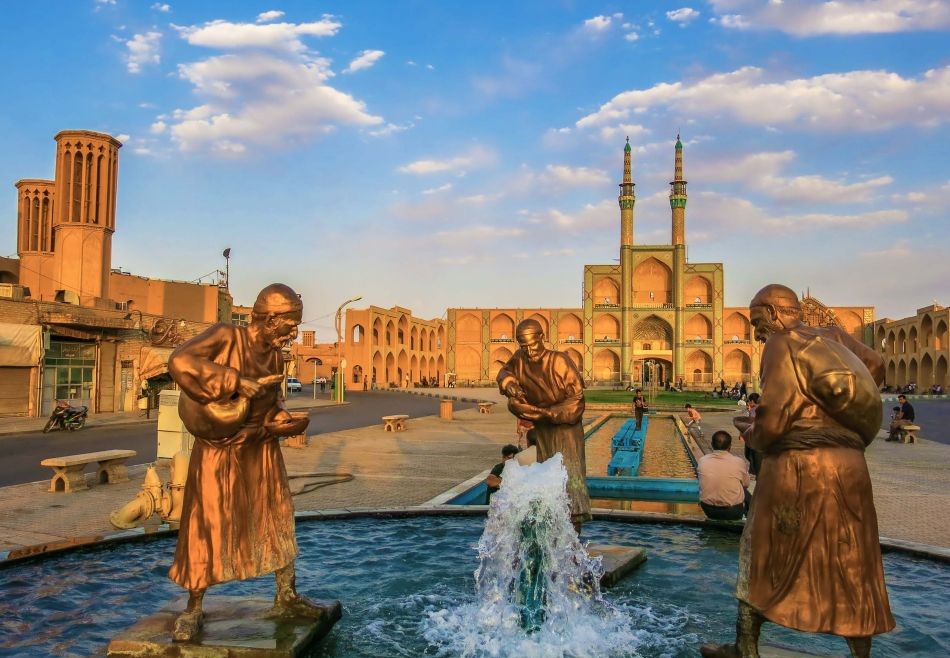 There used to be three water storages in Amir Chakhmaq Square but one of them has been destroyed through time and only two of them have left. They were still used until about 40 years ago when there was no water pipe network. They have been forgotten since then and their functionality has been transformed. 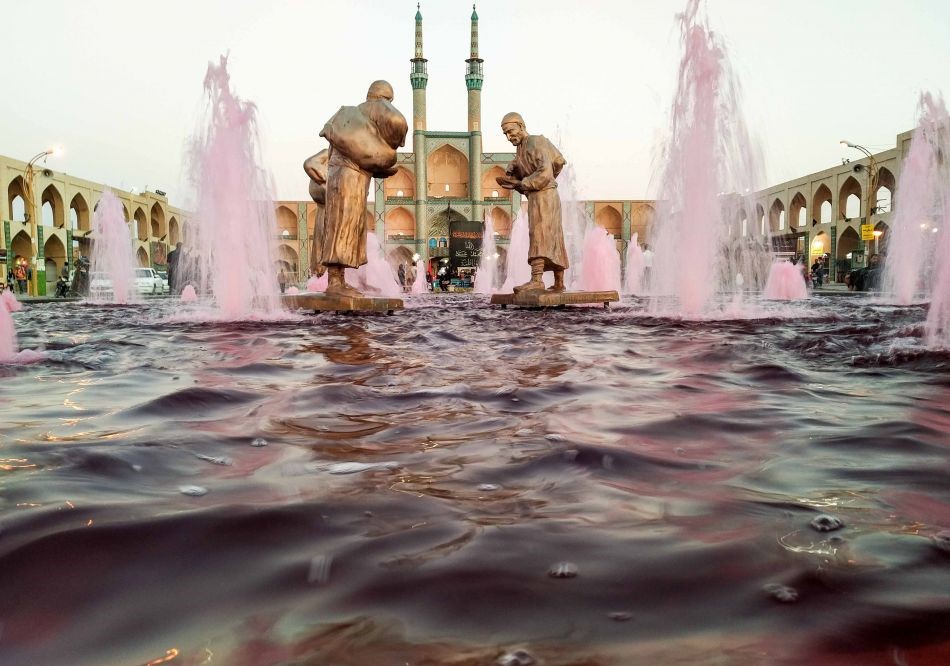 Other Parts in Amir Chakhmaq Complex

In addition to our exploration of different main parts of Amir Chakhmaq Square, there are some other less prominent parts. There are public baths, caravansaries, or historical elements like the copper statues in front of the pond and fountain. There are also some graves of unknown martyrs of the Holy Defense added in the recent years to create a spiritual atmosphere. 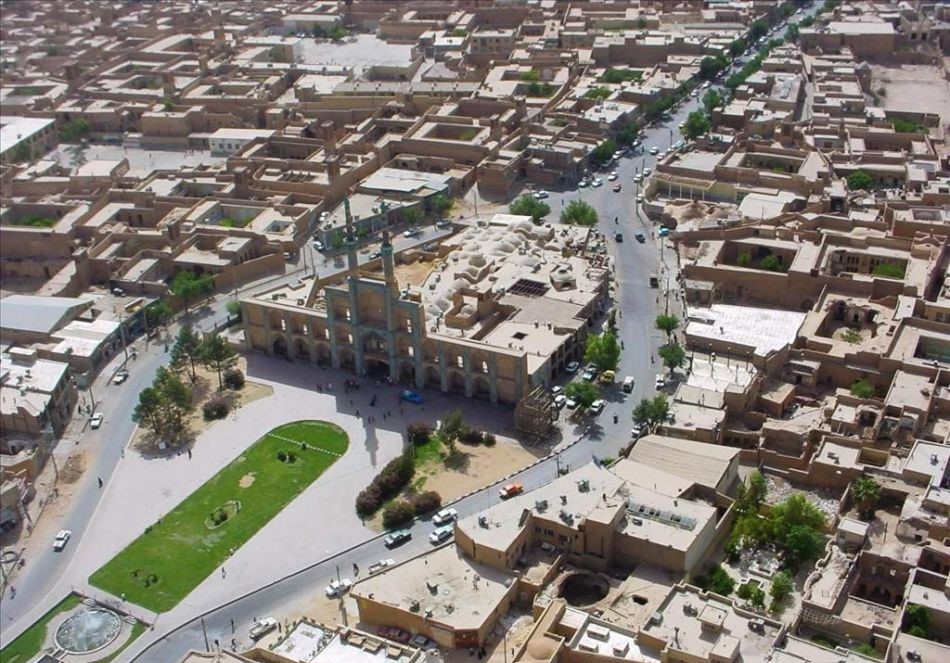 Where to Eat near Amir Chakhmaq Complex

Yazd Traditional Restaurant, Baharestan Restaurant, Hamila Burger, and Karizma Café & Restaurant are some of your choices to eat nearby.

Where to Stay near Amir Chakhmaq Square

How To Get To Amir Chakhmaq Complex

No matter if you are driving through Ghiam Street, Imam Street, or Salman-e Farsi Street, you will see the amazing Amir Chakhmaq Square on your way.

You can take Salman-e Farsi Street and walk around Amir Chakhmaq Square while enjoying its nice monuments.